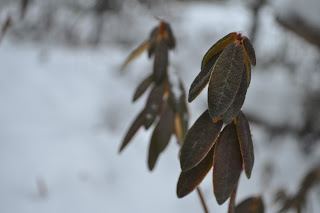 Our winter traveling world varies dramatically from summertime.  During summer, paddling and portaging in the wilderness, we mostly avoid wetlands - for they harbor masses of mosquitoes.  Plus, the prospect of stepping into a particularly mucky spot and going in up to your knees or (gasp!) waist is not most peoples' idea of summer fun.
However, the onset of winter means the mucky bogs and wetlands freeze, and the bugs have vanished.  Now these wetlands make for excellent travel by dogsled, ski, and snowshoe because they are flat, protected from biting winds, and not subject to slush. The fallen snow makes for lovely enchanted forests of black spruce, weighed down with white, in the wetlands.

Although not as eye catching as the trees, a look under the black spruce or tamarack trees in the frozen bogs will likely discover a common wetland shrub called Labrador tea.  While guiding, I pause and point it out along the dogsled trail, encouraging dogsledding guests to pocket a couple handfuls for later back at the lodge. 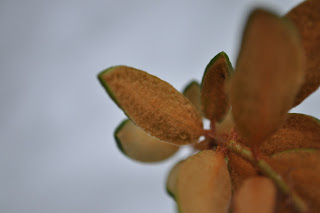 The shrub often carpets the ground and grows one to three feet tall, with leaves one or two inches in length. Fragrant, elongated leaves have a leathery green top (or, often a brownish top in winter), with edges that roll downward.  The special part of these leaves is the underside.  Flip them over to see the densely hairy copper-colored bottom.  Naturalist and author Mark "Sparky" Stensaas calls them the "hairy armpit" leaves.  I know of no other north woods plant with such a similar characteristic, and it is an excellent identity clue.

The most commonly confused similar plant may be leatherleaf, another common wetland shrub - but one that lacks the hairy underside.  Also, leatherleaf leaves typically angle upward, whereas the Labrador tea leaves often droop downward or point out horizontally.

In late May through June, once the mosquitoes have returned and the dogsleds are stored, Labrador tea blooms with dime-sized white flowers - each with five petals.  If you are not in the wetlands at that time of year, you may see the flowers while paddling along boggy shorelines.

With such a name, it is no surprise that people steep the leaves in hot water for five minutes or so to make a hot beverage.  I've found that placing a large handful of leaves into a coffee filter, and dunking them in a hot mug of water for five minutes is a simple way to prepare the herbal  drink with easy cleanup.  The concoction can taste quite woodsy and few people claim it to be particularly pleasing straight up.  However, a healthy dose of cream and sugar, perhaps not surprisingly, makes for a delightful occasional beverage. 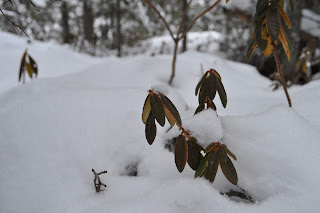 Labrador tea is sometimes called medicine tea, Indian tea, swamp leaf, muskeg tea, or Hudson's Bay tea.  The reference to medicine probably relates to the fact that Native Americans, such as the Chippewa, used the tea to treat a range of maladies including colds, digestion issues, asthma, kidney problems and fever.

Although the beverage may provide some health benefits and is commonly referred to as a desirable tea drink, it is important to know that the leaves contain a potentially poisonous compound.  That's probably why you won't find this tea on supermarket shelves.  Thus, the tea should only be consumed infrequently and not in large quantities.  To limit your intake, maybe only drink Labrador tea while you're on a dogsled trip, unless, of course, you're a dogsled guide.
Posted by Jason Zabokrtsky at 12:55 PM