NEWS RELEASE
US Forest Service
Superior National Forest
Duluth, MN - As part of our ongoing service to the public, managers on the Superior National Forest have been working with a contractor over the past few years on several changes to increase efficiency of the wilderness permit reservation system.One of the outcomes is a reduction in the reservation fee charged by the contractor to process Boundary Waters Canoe Area Wilderness (BWCAW) permits.  Effective March 1, 2011, the fee to reserve a BWCAW permit will drop from $12.00 to $6.00.
The reservation fee is separate from the user fee.  User fees are utilized by the Forest Service for improving and maintaining portages and campsites in the Wilderness as well as for educational activities.  There is no change in the BWCAW user fee.

Some of the changes that contribute to a more stream-lined service include:

Increased efficiency in operating the annual BWCAW permit lottery.   For example: It now takes about 30 minutes to run, versus an entire day previously, and confirmation letters are emailed instantly.

Ability of Forest Service staff to now enter information directly into the system rather than involve contract staff.

Another change merged the BWCAW call center and customer service numbers into the centralized National Recreation Reservation System number.  This actually extended the hours of operation significantly.
National Recreation Reservation Service:  877- 444-6777
March 1 to October 31, from 9:00 am to 11:00 pm, Central time
November 1 to February 28, from 9:00 am to 9:00 pm, Central time
Posted by Jason Zabokrtsky at 4:35 PM No comments: 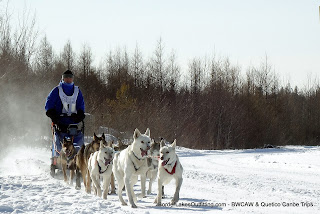 I just returned from the finish line of the WolfTrack Classic Sled Dog race.  This photo shows the 10 dog race winner, J. Ross Fraboni of Duluth, arriving at the finish line in Ely this morning.  Fraboni took first place in the 130 mile race, followed closely by Jennifer Freking of Finland, MN, in second place.  Congrats to all of the race participants!
Posted by Jason Zabokrtsky at 10:55 AM No comments:

Lake Surfaces Have Firmed Up Around Ely, MN 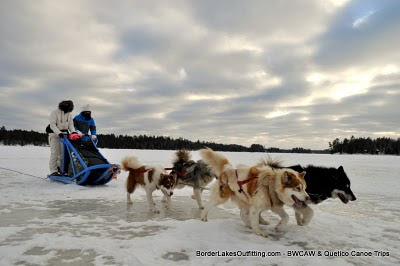 After a winter season with lakes of all sizes mired in deep and sometimes impassable slush, conditions have suddenly changed.  Last week's warm temps reached almost 60 degrees F and settled or melted the the fluffy lake snow that had insulated the slush.  Then, some solidly cold and windy weather froze over the slush.  I've seen the results while guiding dogsled trips this week.  The lakes are quite fast for dogsledding, skiing, and walking now.  While there are some patchy spots of bare ice that is difficult to ski or walk on, there is plenty of excellent snow-covered surface for skate skiing.  These are the conditions that one can skate ski almost effortlessly for miles and miles.

This photo shows a family from Apply Valley, Minnesota, dogsledding with me on White Iron Lake near Ely, MN, on February 22.  Their four-year-old daughter is tucked into the sled bag with barely her pink hat showing.
Posted by Jason Zabokrtsky at 1:20 PM 2 comments:

The Ojibway members of the Lac La Croix First Nation village are allowed special privileges to use motorized boats on certain lakes within Quetico Provincial Park, and to use float planes to access certain lakes in Quetico. These designated lakes may vary annually.

The 2011 season lakes the Ojibway guides may use motors on in Quetico are: Roland, Middle Roland, Beaverhouse, Poohbah, Cirrus, Minn, McAree, Quetico, Tanner, and Wolseley. The designated fly-in lakes for the Ojibway are Beaverhouse and Quetico Lakes.

It is extremely rare, but possible, to see motor usage on these lakes in Quetico Provincial Park.
Posted by Jason Zabokrtsky at 3:08 PM No comments:

A joint project of the Cornell Lab of Ornithology and the National Audubon Society, this free event is an opportunity for families, students, and people of all ages to discover the wonders of nature in backyards, schoolyards, and local parks, and, at the same time, make an important contribution to conservation. Participants learn more about the count, and report their sightings online at www.birdcount.org.
Posted by Jason Zabokrtsky at 11:09 PM 2 comments:

These are just some of the examples of amazing snow sculptures exhibited by some wonderfully talented artists in the park in Ely now as part of the Ely Winter Festival. 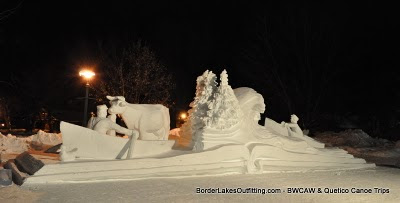 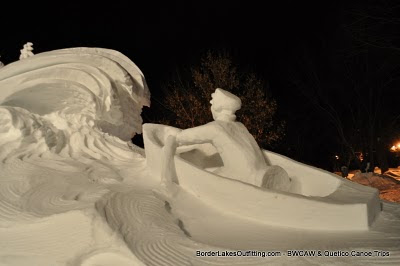 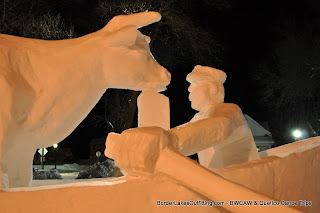 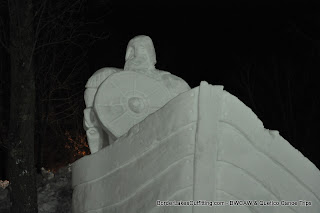 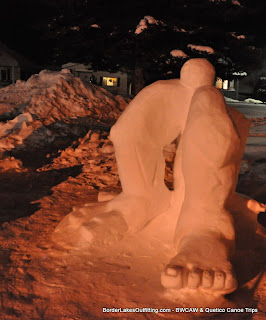 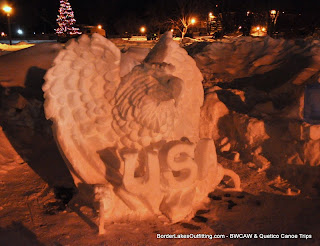 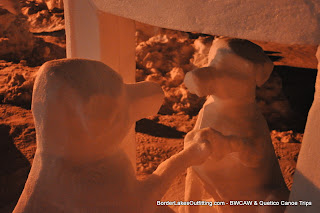 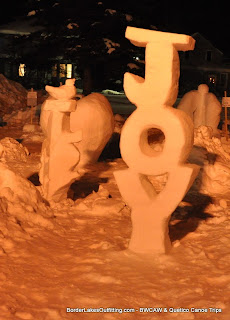 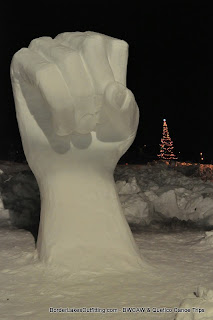 Posted by Jason Zabokrtsky at 5:26 PM No comments: 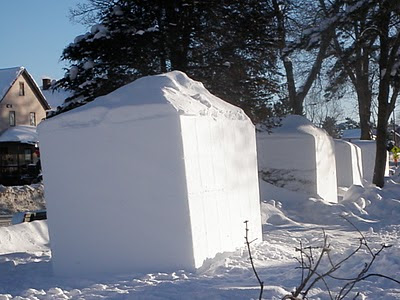 We celebrate winter in Ely, Minnesota.  The Ely Winter Fest is February 3 - 13.

I snapped this photo in 20 below Fahrenheit temps this morning.  The massive snow cubes are set up in the park in Ely.  The next step is for the snow carvers to start there work beginning on Feb. 3.  They will be wonderful artistic creations by this weekend.  We're in suspense to see what the artists create to top all the great ones done last year.  Check back here for photos of the snow sculptures.

Much of the country has been getting record amounts of snowfall. While Ely itself may not be breaking records just yet, we are enjoying a real winter this season. Every few days or so, it snows another couple inches or more. Unlike with cars, extra snow while dog sledding is not too problematic, normally. More snow gives us more padding on our trails and generally freshens things up.

With all this repeated snowfall, our packed dog sledding trails get covered anew. Recently, during a day of dog sledding, it snowed about eight inches, a hefty amount for us. Here, Otok and Patches pull Nancy and Colleen through the collecting snow. 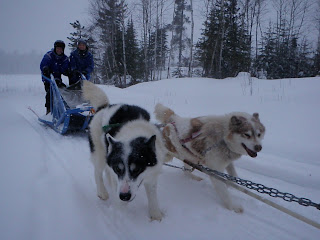 The day after this eight inches of snow, my dog sled group was out breaking open the same trails from the day before. Two Wintergreen staff also headed out that morning on snowmobiles to pack down some of the trails for us. As we were leaving our lunch spot on Saturday, we got word from one of those staff members saying he'd got the snowmobile pretty well stuck in slush and thin ice and thought he needed the help of our dogs to get it out.

We gallantly headed on over, with the "Here We Come to Save the Day!" theme in our heads. We found the snowmobile on a trail over a small creek. The weight of the snowmobile had pushed through some wet snow and down into the ice above this beaver creek, where it's not uncommon to have thinner ice because of moving water underneath. Because the snow had not been well packed down earlier in the season, the left side of the snowmobile had dropped down through thin ice. Despite attempts with logs to give it traction, our valiant staff member could not get the machine up and out. 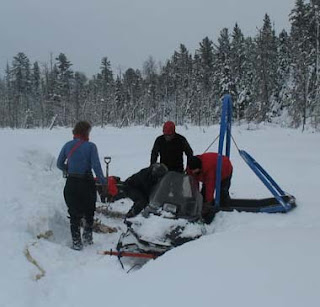 So we removed the team of six dogs from our sled, backed them up (easier said than done!... sled dogs pull forward), and attached them with a tow strap to the sled. We revved up the snowmobile and gave the dogs the "Hike!" command while another guide prepared to lead in front. 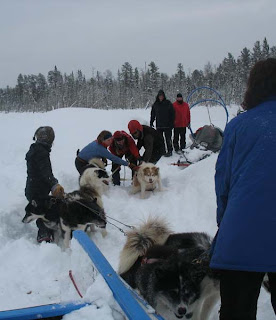 The dogs didn't hesitate to jerk forward and pulled it right out of its hole. Success! 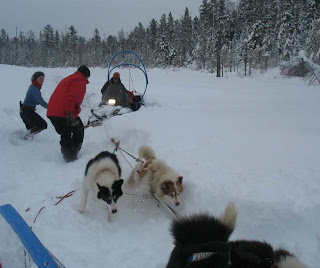 In the next instant, though, after the snow-go had made it out by a few feet, the tow strap came loose of the dogs. 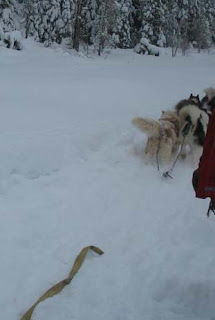 They went running like mad without any weight behind them, taking over the front guide. She heard our yells, saw that the dogs were in fact entirely loose though attached to each other, and tackled some of them. Two more of the guides ran up as fast as possible and got the lead and wheel dogs held down. We held tightly until the dogsled could be reattached to the gangline, and we got people standing on the brake again. 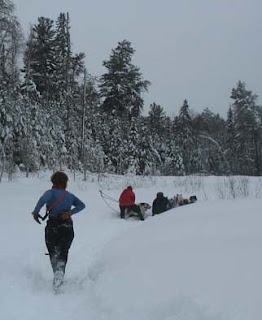 Our group thought it was great! That hole in the ice, now exposed to the cold air, froze promptly. To ease the minds of those yet to be dog sledding this year, the snowmobile punched through because of its weight. The dogs are individually light enough to run right over that trail, and the sled's weight would be spread across its runners evenly. 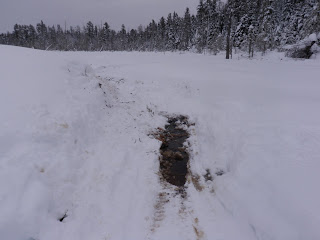 There's never a guarantee, but here's to hoping the next snowmobile run goes smoothly! This was a meeting of technologies that doesn't occur terribly often.
Posted by Kate Ford at 5:13 PM 2 comments: