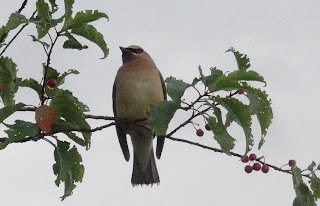 Summer is a busy time for Cedar Waxwings here in northern Minnesota. Much of the summer, you will find these birds on their perfect perch waiting for dinner to pass by. When the 7-inch bird spies its scrumptious meal of mosquitoes or moths, it swoops down, snatches the bugs up, and returns to the same perch to await more unaware passersby. These birds typically eat the abundant bugs of summer, but come mid-July, tasty berries lure them away from their carnivorous ways. 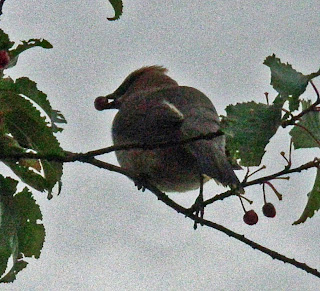 We found these Cedar Waxwings enjoying quite a meal in the BWCAW from the relatively small (not more than 20 feet high or so), smooth-barked Pin Cherry tree. The Pin Cherries ripen in mid- to late-July, and are bright red and partially translucent with a large pit in the middle. Fortunately for the birds, who are wild about the cherries, the fruit is very sour to our human taste buds. It takes a lot of sugar to make the Pin Cherry taste decent!

While a lot of fruits fall to the ground during the tree's short lifetime of 25-30 years, you won't find this tree all over the forest. It needs plenty of sun. Often the pits of the Pin Cherries fall in the shade of the tree itself where they can't immediately germinate. Fortunately, the pit has a waterproof coating which prevents the seed from rotting, even as long as fifty years or more! When a disturbance eventually happens, like a strong windfall or forest fire, sunlight fills the ground and the seeds germinate en masse. Soon after, there will be a solid stand of even-aged Pin Cherry trees. The trees that we found were in a very sunny spot on the top of a high hill overlooking one of the many beautiful lakes of the Boundary Waters. 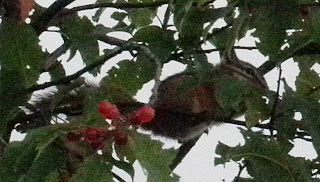 There was one other little guest hiding in the tree. This chipmunk was perched a few feet up in the tree enjoying his own snack of Pin Cherries!
Posted by Kate Ford at 3:23 PM 1 comment:

Underwater Photography in the BWCA 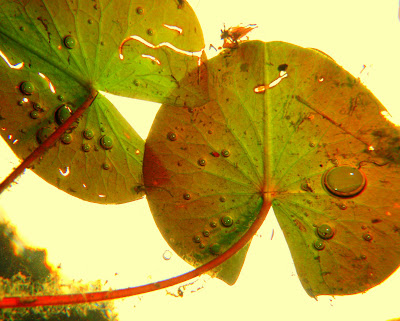 Travel in the Boundary Waters Canoe Area Wilderness is mostly via lakes and waters. So how do you deal with cameras around all that water?

Some people embrace the water and bring along waterproof cameras. They definitely take some of the stress out of the possibility of dunking an expensive camera. Kate is carrying a waterproof camera this summer and she really likes that she can keep it at hand rather than packed away in a cumbersome case. She shot this photo by holding her camera under water and pointing it toward the sky. My favorite part of this perspective is that you can see the air bubbles on the underside of the lilly pads!

Kate is using an Olympus waterproof shockproof camera and she likes it.

If you're interested in photography and want to improve your skills while immersed in the BWCAW, consider participating in our Boundary Waters Photo Workshop led by professional magazine and nature photographer Layne Kennedy.  More info on our BWCA Photo Workshop is at this link:  http://boundarywatersguideservice.com/PhotoWorkshop.html.  Most folks bring cameras that are not waterproof on photo workshops, and we take special care to make sure they return safely.
Posted by Jason Zabokrtsky at 9:12 AM No comments: 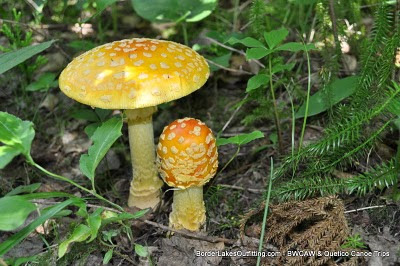 Fly Amanita is the quintessential toadstool we started drawing as kids in elementary school.  It's also known as the "fly mushroom" or "fly poison mushroom" because it is believed a saucer containing Fly Amanita in milk will attract and kill flies.

The young mushroom begins covered in a universal veil and may be misidentified as a Puffball mushroom.  As the mushroom grows, the veil breaks apart and its remnants are seen as whitish "scabs" on a bulbous cap.  As it continues to mature, the bulbous cap becomes more flat and the white gills are visible on the underside of the cap.  When the mushroom reaches maturity, the outer edges of the cap may cup upward. 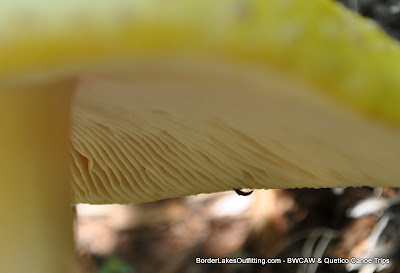 The Fly Amanita is indigenous to northern Minnesota.  It is usually yellow-orange here - in contrast to bright red varieties elsewhere.  The cap size ranges from 3 to 10 inches wide, and the white stem grows 3 to 7 inches tall.

They are found growing from the ground - not from trees - from June through September. They are typically found among stands of pines and aspens.

The toxins muscimol and ibotonic acid are contained in Fly Amanita.  Ingestion can cause serious internal injury and, in some rare instances, death.  They are generally considered poisonous and not edible.  However, some report that the toxins may be parboiled out of the fungus, and rumors surround the hallucinogenic effects caused by people eating these dangerous mushrooms.  Lore has it that the Vikings of the eleventh and twelfth centuries ingested them and found superhuman strength.  And Lewis Carroll, author of Alice in Wonderland, was a known experimenter with drugs.  His book illustrations included a white-spotted red mushroom appearing to be Fly Amanita.  Another side effect of ingesting Fly Amanita is macropsia - a condition making things appear larger than life size.  Sounds like the book, doesn't it. 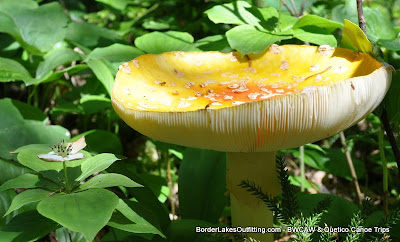 I snapped these photos recently on a portage along the Little Isabella River in the BWCAW.  During the canoe trip, deer flies buzzed around our heads.  It makes me wonder:  Might Fly Amanita in a milk concoction work for meddlesome deer flies around camp?
Posted by Jason Zabokrtsky at 12:25 PM 1 comment: