CAUSE : Most fires are believed to have been caused by lightning. One fire was from an   escaped campfire.
AGENCY:  Superior National Forest
RESOURCES:  Fire patrols and fire suppression are being done with Forest Service DeHavilland Beavers. Helicopters are assisting suppression efforts with water drops.
FIRE INFORMATION:      (218) 365-7600

TODAY’S MESSAGE:  This will be the last update on these fires. 1” of precipitation fell across the forest early July 25th with an additional small amount early today. With the significant precipitation, crews made good progress and many of the fires have been either declared controlled or out.  Only the Yodeler fire is still smoldering. A fire is consideredcontained when there is a fire line (which may include natural barriers such as lakes) encircling the fire, but the fire is not under control. A fire is considered controlled when there is a complete fire line around the fire and all hot spots that are an immediate threat to the fire line have been cooled down.

BWCAW Fires Updates - Info from the USFS Received on July 23

DATE OF DETECTION:  see each fire’s notes
CAUSE : Most are believed to have been caused by lightning.

AGENCY:  Superior National Forest, West Zone
RESOURCES:  Fire patrols and fire suppression are being done with Forest Service DeHaviland Beavers. Two Type 3 helicopters are on loan from the state and one type 3 helicopter should arrive today. Personnel are listed with each fire.

SPECIAL MESSAGES:  The amount of moisture in the duff layer is very low. Visitors and residents are encouraged to be extra cautious with fire. In the Boundary Waters Canoe Area Wilderness (BWCAW), visitors must not leave fires unattended and must drown fires out cold.

Additional Information:
·         The Perent Lake Fire on the southeastern edge of the Boundary Waters Canoe Area Wilderness is approximately three acres. It was first detected on July 3rd and re-kindled on July 21st. Safe access to this fire for ground crews has been difficult. 8 crew members are working it today. The fire is under East Zone management.
·         The Portage River Fire was discovered on July 21. The initial estimate of two or three acres has been revised to three fourths of an acre. Its location is: T65, R14, S14: ¾ of a mile north of the Echo Trail and ¼ mile west of the Portage River Fire. A six-person ground crew is working this fire.
·         The Ed Shave Fire is south of Ed Shave Lake, east of Big Lake: T65, R13, SW corner of Section 36. This fire is one fourth of an acre in size and is now controlled.
·         The Coleman Island Fire is on a peninsula of a large island in Lac LaCroix. This fire was discovered yesterday. A full size-up was prevented by a thunder storm. The cause of this one was an escaped campfire. Four people are staffing.
·         A new report was just called in on Hustler Lake. The pilot reported smoke on the ground in heavy timber. The size is estimated at one tenth of an acre. The location is T66 R14, the NE corner of section 6.
·         Forest Service crews are also clearing forest roads in the Lake Leander area due to damaging winds yesterday.
Posted by Jason Zabokrtsky at 5:21 PM No comments:

A Black Bear Swimming Across Knife Lake in the BWCAW 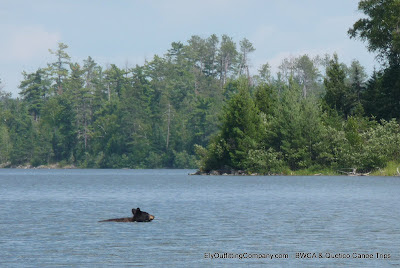 Seeing wildlife in its natural setting is one of the great treats of a Boundary Waters canoe trip.  Our guide, LynnAnne Vesper, snapped this photo of a young black bear swimming across Knife Lake this week.  Seeing a black bear on trail is particularly nice when it's not sniffing around for your food pack.
Posted by Jason Zabokrtsky at 4:29 PM No comments:

Cow and Calf Moose on the Moose River 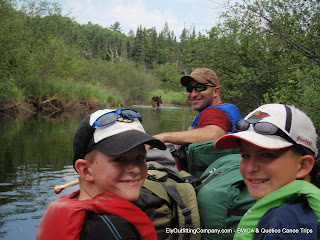 It's an aptly named river.  Our guide, Max Pittman, took this photo recently while paddling down the Moose River.  Our guests, John and his boys, got mighty lucky to see this cow and calf moose (in the background in the river) up-close!  We've had more moose sitings on the Moose River north from BWCAW entry point 16 this summer than any place else.
Posted by Jason Zabokrtsky at 8:32 AM No comments:

Why we do what we do This photo of Boundary Waters Guide Service is courtesy of TripAdvisor


Sharing the Wilderness with people is a real privilege.  When guests share a Boundary Waters experience with us, and then provide feedback, it really matters.  Thanks to our recent guest, Rick, for sharing the following feedback:

I contacted Jason, the owner of the service and booked a two night, three day guided trip for myself, a friend and my two kids ages 8 and 11. My kids have never been camping before, so I was a little worried that they would not have a good time in the wilderness. Jason was a pleasure to deal with and after asking me several questions about what we wanted to get out of the trip, he suggested a route for us, and arranged for us to get our entry permit.

We met Jason and our guide Max the day before the trip started at Jason's shop. Both Jason and Max immediatley put us at ease and did a great job making the kids excited about the adventure the next day. It was obvious they truly wanted us to have a great time. From the moment we hit the water until we left, it was a blast. Max was awesome: great cook, great guide, funny and smart. The kids loved him. We found a terrific campsite on an island that even had a great rock cliff to jump off of. The food was top-notch, as was all the equipment. It is clear that Jason takes pride in providing the best of everthing for his clients. This was no cattle call operation as is the case with other outfitters. We will be back. My kids are already asking when we can go again. Thank you Jason and Max for a wonderful experience that we will not forget.

Posted by Jason Zabokrtsky at 12:07 PM No comments: