Bald Eagle Wants a Loon's Catch in the BWCAW 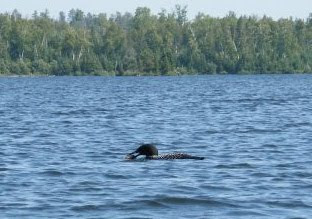 The few times I have seen a loon eating fish, I have just caught a quick glimpse of silver as the loon swallows down its small meal after resurfacing. Today, my crew and I came upon a loon with a big fish, more than a few inches around and probably ten inches long. It was pecking at its dead fish, and then going under and resurfacing as it worked to grab some flesh of the fish. We watched it for a few minutes as it worked off bites of the fish.

The loon yodeled in the classic manner and then out of its throat came something like a “yipe!,” it dove under, and before we could see it happening, a bald eagle soared over, swooped down with talons out, and grabbed that fish right off the surface of the water. 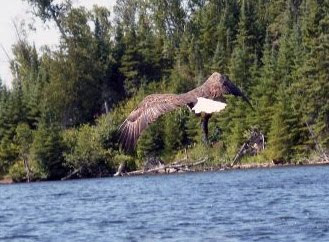 The eagle flapped a few strokes straight up to the nearby tree where it had a nest, and two young eaglets appeared screeching at the top of the tree, apparently saying thank you as their parent passed off their lunch. The loon reappeared after a minute or so of hiding underwater, probably a bit disgusted at not getting to enjoy its hard-earned meal. 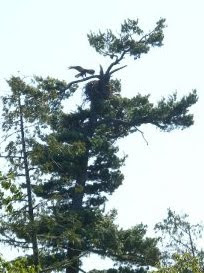 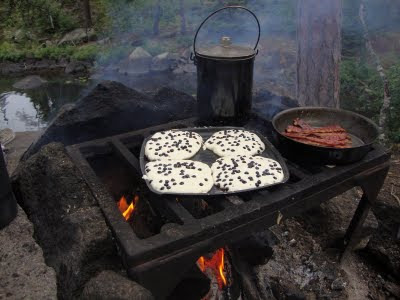 The wild blueberries are peaking about now. We cooked up these pancakes loaded with freshly picked blueberries on Lake One this morning.
Posted by Jason Zabokrtsky at 12:22 AM 2 comments:

Fishing With Kids in the BWCAW is Fun 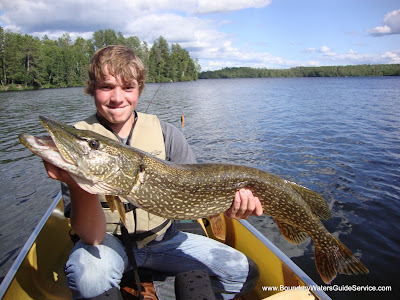 A nice family from the Chicago area stayed at Fenske Lake Cabins near Ely this week and joined Boundary Waters Guide Service for a couple days of guided fun on the lakes.
The whole family traveled by canoe to see some historic pictographs and pick wild blueberries yesterday. Today Keith took his two sons on a fishing trip with us. Jeremy (age 12) caught this nice smallmouth bass, and Adam (age 15) caught the lunker northern pike. Great job boys! 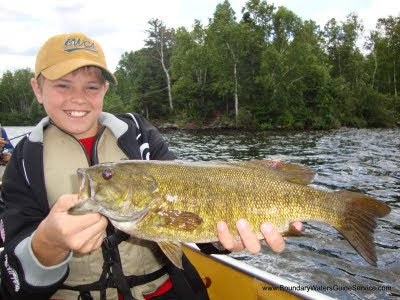