Day Hiking in the Boundary Waters on the Sioux-Hustler Trail 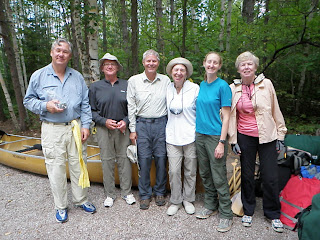 I guided a group of five strong sixty-something hikers this week. It was their first canoe trip, but certainly not their first experience camping! These pleasant folks from Virginia have been hiking and backpacking on some big adventures all over the United States. With this background, the group was keen on hiking for a day in the Boundary Waters. On our layover day, then, we decided to head over to the Sioux-Hustler Hiking Trail to see what we could find.

We discovered that the nearly mile-long Oyster to Hustler portage is flooded out for about ten rods (or canoe-lengths). While a few portages may have some muck and mud, I have never seen another portage as flooded as this. Not to be dissuaded, our group went for it. 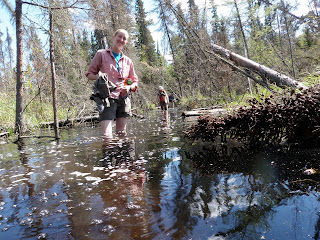 Fortunately, it was solid ground as we waded through the mid-thigh-deep water and headed on down the trail on a perfect day. We turned on to the Sioux-Hustler trail from the portage and shortly discovered an extraordinarily large beaver dam. The beavers here had been hard at work for years to create this stunning piece of engineering. 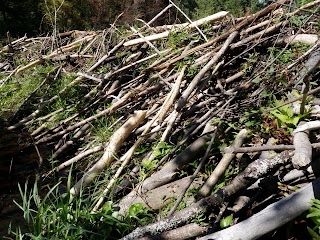 This dam held back about four vertical feet of water. I checked out the different growth to be found in this wetland growing in the dam itself and discovered this pretty green leaf. It is called Sensitive Fern and is apparently named such for its sensitivity to cold temperatures. After tonight's predicted frost, these leaves will be some of the first to wilt and disappear. 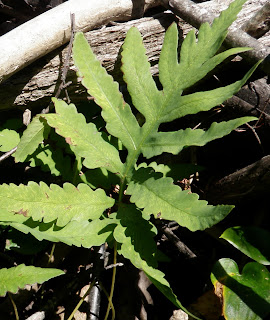 Though this 100-foot long dam was constructed like all beaver dams in such a fashion that a person can walk on it, our group decided to turn back and investigate the other direction of the trail. Upon a high rock, we found these beautiful specimens of Gray Reindeer Lichen, sometimes called Caribou Lichen or Caribou Moss. It is named for its obvious resemblance to the antlers these animals sport through the summer months. It is also the primary source of food farther north for caribou in the winter. Caribou were once found occasionally in this corner of Minnesota. Now they are only very rarely found in a small portion of northwestern Minnesota, coming down occasionally from Canada. 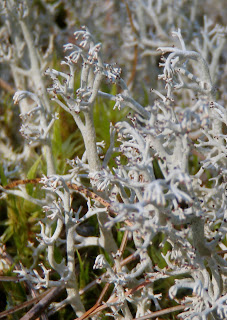 These lichens probably took around 80 to 100 years to grow up to the eight-inch height we found. Lichens are a complex partnership of fungus and algae, and are pioneers in bare, rocky areas. They break down rock minerals with their lichenase acids, creating a small crack in the rock where water can freeze and ultimately create more cracks in the rock. This makes a place for the lichen to gain a foothold and thrive. Dust and dirt blow in, slowly creating organic build-up, and ultimately allowing more growth to eventually come in. As part of their assurance of success, the lichen dries out with the weather. During a dry spell, the fungal portion of the lichen thickens the walls and slows or shuts down the photosynthesis process to await a more friendly environment. This ensures that it can survive the extreme heat and cold of northern Minnesota. In the summer, after a dry spell, the slow-growing plants will crunch down into dust under weight, which is why our group stuck to the trail. 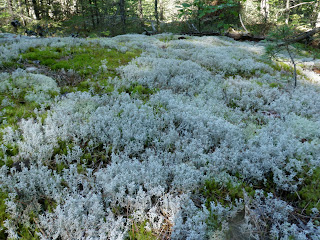 The group had a great time out on the water, paddling, portaging and exploring along the hiking trail. I only hope that I am that active and strong in my sixties. An inspiration to us all!
Posted by Kate Ford at 4:19 PM

that's one big beaver dam! i don't think we would have gotten our canoe over that one - thankfully, the ones we encountered were more on the 2-foot-height average.

thanks again for our great outfitting experience!

I was on that portage trail this last summer. A big change from Devil's Cascade where I had been fixing the trail just a week earlier.