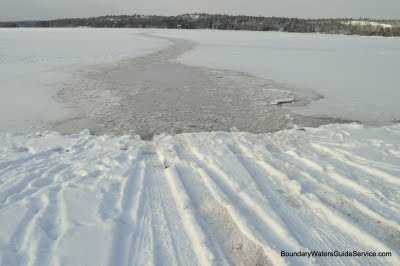 Most folks had their motorboats winterized by the end of October. Virtually all other boats were tucked away by mid-November. But, this photo shows how one motorboater can lay claim to the title of last boater on Shagawa Lake in 2009.
To say the least, it's unusual to be boating on an ice-covered lake. But that's what happened here. Someone used the Shagawa Lake landing for its intended summertime purpose near Grand Ely Lodge on the edge of Ely today.
Shagawa Lake was open water yesterday, and froze over night. This morning the sound of a boat crashing through ice resonated all the way to the Grand Ely, and people peaked out the window at the sight of a motorboat breaking its way through an apparently fully iced-over Shagawa Lake.
I don't know why the boat was out there, but some have speculated that the boat may have been retrieving nets from netting whitefish, or maybe he just wanted the title of last boat on Shagawa 2009.
Posted by Jason Zabokrtsky at 8:10 PM