Basswood is pretty much open.

Snowbank – west end open, only about 1/3 of the lake is open, probably couldn’t get to

Gunflint area quite a few lake with ice.
Posted by Jason Zabokrtsky at 10:10 PM No comments:

The Latest BWCA Ice Out Info

We just received this info from the Forest Service:

This information is from today’s flight:

Moose Lake: southwestern third is open; northeastern two thirds frozen but dark ice.
S. Kawishiwi R. and Gabbro Lake are mostly open.
Turtle is open.
There is ice in the middle of Bald Eagle.
Clearwater and Pietro are frozen (thin ice) but Gull is open.
Quadga and Bog are open.
Isabella and Perent still have a lot of ice in the middle.
Polly and Phoebe are open.
Alton and Sawbill are still frozen.
Generally the smaller lakes in the south east are open or mostly open. Larger lakes are still frozen.
Alice is frozen.
Insula south of The Rock is open, the northern portion is frozen.
Lake 3 is mostly open.
Knife Lake including the South Arm is mostly ice.
Saganaga is still frozen.

Snowbank is iced but the bays are opening

Today’s Safety Message:
Grasses are dry and cured. We’ve had a few small fires. Keep fires small and stay nearby.
Winds will be from the south at 5 to 15 mph but with gusts up to 30 mph. Wear PFDs.
Posted by Jason Zabokrtsky at 6:49 PM No comments:

We just received this report from the Forest Service:

FS Pilot report—this information is from a flight late Sunday afternoon. There is a flight up now so more
information will be sent later:

Grasses are dry and cured. We’ve had a few small fires. Keep fires small and stay nearby.
Winds will be from the south at 5 to 15 mph but with gusts up to 30 mph. Wear PFDs.
Posted by Jason Zabokrtsky at 1:44 PM No comments:

This additional information was forwarded to us by the Forest Service today:

Posted by Jason Zabokrtsky at 10:01 PM No comments:

Boundary Waters Ice Out Update for May 10 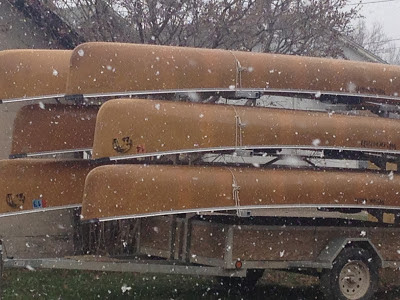 I snapped this photo at our shop in Ely a few minutes ago.  Yep, it's snowing.

Following is the most recent info we received from the Forest Service at 5:30 PM on May 10:

Posted by Jason Zabokrtsky at 12:51 PM No comments:

Boundary Waters Ice Out Update for May 9

We received the following info from the USFS today.

Reports from observers at landings:

•    In general, smaller, shallow lakes and rivers on the western half of the Superior National Forest are opening up.
•    Rivers on the east side of the forest are opening. Lakes are almost all still frozen.
•    There are no reports of any lakes associated with river entry points being open. The Little Indian Sioux and Moose/Portage (aka Nina Moose) River water levels are high.
•    Fall Lake is open from the Fall Lake Campground landing to the falls. Newton is open. Pipestone is iced in well south of Caribou Point.
•    Tofte, Moose, and Snowbank Lakes are still frozen.
•    Ojibway Lake has 8 feet of open water out from the public landing.
•    The Kawishiwi River leaving east from the Lake One landing is open.
•    Burntside is frozen.
•     Little Long and Fenske Lakes are almost completely full of ice.
•    Johnson (south of Ely off Hwy 21) is open.
•    Robinson Lake (west of Ely on 169) is open.
•    Birch Lake is still solid with white ice.
•    There is open water at the South Kawishiwi River Campground landing.
•    Sawbill Lake’s ice—from 23 inches down to 14 inches today.

•    Please remember large masses of ice may shift. Even if there is a narrow channel open along the edge of a lake the opening may be pinched off suddenly.
•    Winds up to 30 mph are predicted for this weekend.
•    The water is dangerously cold. Wear your life preserver if you go out.
Posted by Jason Zabokrtsky at 8:47 PM No comments:

The US Forest Service is providing the following current ice information.

From FS pilots: They flew a west patrol yesterday from Jackfish west and south to Birch and Vermilion Lakes.
Reports from others:

Posted by Jason Zabokrtsky at 1:34 PM No comments: