Kerry McNally is a Twin Cities television personality and former Discovery Channel host. I guided him this summer on his first trip into the BWCAW. He found the Boundary Waters so inspiring that he's featuring footage from our canoe trip and scenic plane ride prominently in his new movie. It's called Lakes, A Love Affair. The DVD features striking footage of the Land of 10,000 Lakes - from Lake Superior to the BWCAW to Brainerd to the urban lakes of the Twin Cities. The DVD is available at http://www.lakesaloveaffair.com/.

Besides getting some stunning video on the canoe trip, we laughed a lot. In addition to being a television host and movie producer, Kerry is a stand-up comic. Really. He's performed comedy routines on stage in NYC. And keep your eyes out to see him on Letterman one of these days!

Tamarack Trees are in Full Color 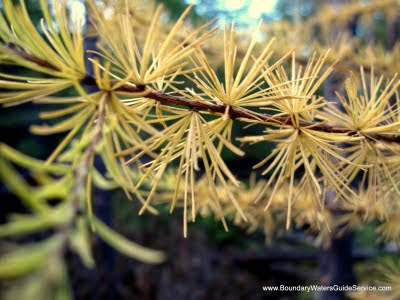 Tamarack trees are ablaze in golden yellows now. After a summer innocuously blending in with spruce and fir trees, they are bursting with color. They are particularly striking against a backdrop of evergreens. The photos show Ely-area Tamarack trees this week.

Once the dogsledding season arrives, the tamaracks will be totally barren. Tamaracks are the only conifer in North America that loses all of its needles annually. Speaking of dogsledding, we'll be relying on fires to keep us warm through the early winter evenings. Losing all of their needles is a good defense mechanism against extreme cold because moisture isn't lost through the needs, but it may not be so effective against unwary wood gatherers. To the unaccustomed eye, a tamarack in winter can be tricky to distinguish from a dead black spruce.

The tamarack wood is rot-resistant and has many uses. Native Americans used the thin, pliant and tough tamarack roots from trees growing in beaver ponds as lashing to connect pieces of birch bark to make canoes, and for building snowshoes. Native Americans also recognized the tree's medicinal properties. A compress of the inner bark was used to treat and soothe cuts, infected wounds, frostbite, and boils.

Naturalist John Josselyn wrote in 1672 that "the Turpentine that issueth from the Larch Tree is singularly good to heal wounds, and to draw out the malice... of any ache rubbing the place thereof." While that sounds intriguing enough, I don't know anyone who has made turpentine from a northeast Minnesota tamarack. If anyone has that experience, please let me know, and I'll report more in the blog.

Tamarack thrive in moist to boggy soils, so fall-colors hunters won't be disappointed by a drive down Highway 1.

Email ThisBlogThis!Share to TwitterShare to FacebookShare to Pinterest
Labels: Tamarack

October Snow in the Boundary Waters 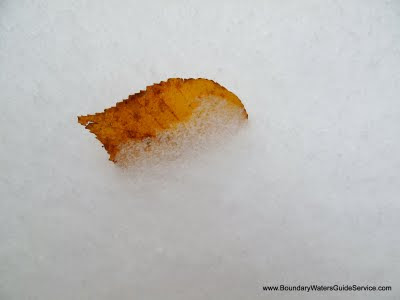 As soon as October 1 rolls around, I'm ready for snowflakes that don't stick to the ground. Once the dogsledding season starts on December 1, I'll be ready to wake up to several inches of snow.

However, it is just plain premature for two inches of snow to be weighting down the tents of late-season BWCAW campers. But, that's what campers found this morning. As I write this, it is about noon and some flakes are still dropping, and the wind is gusting.

The seven-day forecast calls for highs only in the mid-thirties. Maybe we're in for an early freeze-up this year. 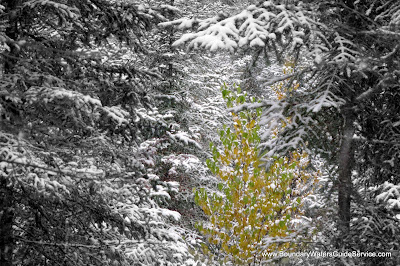 I snapped these photos this morning outside the cabin.
Posted by Jason Zabokrtsky at 12:06 PM No comments:

Poison Ivy in the Boundary Waters 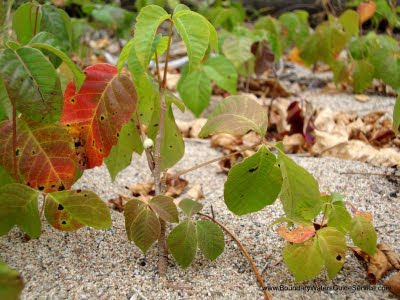 Western poison ivy leaves are not a celebrated fall color, but they can be as crimson as a red maple leaf. The above photo shows poison ivy recently at the sand beach campsite on the west end of Mile Island on Fall Lake.

Some Northwoods guidebooks gloss over or fail to mention western poison ivy. Many people don't consider poison ivy a plant that grows in the Northwoods. 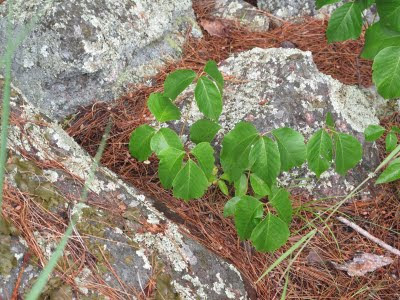 One can identify poison ivy by how it looks. Visual characteristics include: (1) three leaflets ("leaves of three, let it be"); (2) a short woody stem that may look like a brown twig sticking out of the ground; (3) oftentimes growing in colonies standing about knee high or shorter; (4) green leaves changing to fall colors in autumn; (5) leaves oftentimes have a wilted appearance; and (6) the western poison ivy species in the BWCAW is not a climbing plant.

One can also identify poison ivy by where it grows. It grows in a variety of ecosystems, but particularly likes sun and dislikes permanently wet soils.

Sarsaparilla plants are sometimes misidentified as poison ivy. Sarsaparilla is a low-growing plant that grows profusely in the BWCAW. It similarly has three leaflets, but sarsaparilla is distinguished by a pair of leaflets further down the stem.

The oily toxin from poison ivy is almost immediately absorbed through human skin. Washing the affected skin within one to three minutes with cold water and soap may help prevent the itchy symptoms. Washing later may wash off the residual toxin and prevent its spread. Itchy blisters may appear promptly or not for 24 hours or longer. The itchy blister fluid does not contain the toxin and is therefore not contagious.

Many animals, including my dog, eat the leaves with no apparent harm. However, animals may carry the toxic oils on their coats and transmit them when they touch people.
Become familiar with poison ivy so you can squat in the woods with confidence. The alternative could be really uncomfortable.